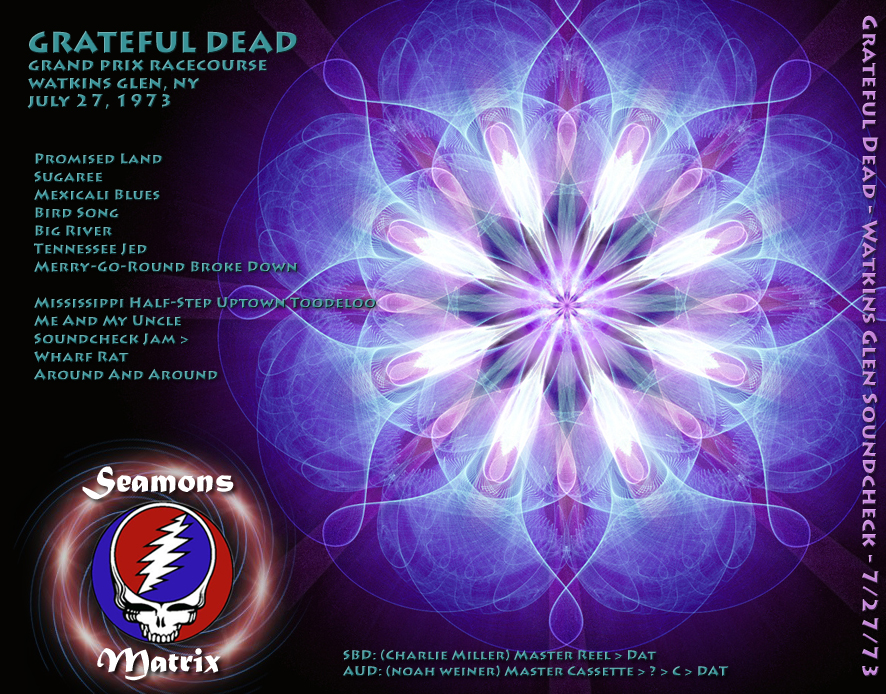 -- The circulating 1st Set came labled Master Reel, but obviously is not.

Thank you to Charlie Miller for the SBD transfer,

and to Noah Weiner for the AUD transfer.

1) Promised Land in the AUD source appears to be patched from a different AUD recording.

2) Mexicali Blues in the AUD source had some "warping" issues in the earlier portion and does not sound as good as the AUD songs that follow, so I decided not to matrix it.

3) Set 2 sounds better due to the better sounding SBD source (master reel), which is not the same as set 1.

4) Soundtrack Pro was used to clean up numerous instances of light static in the set 1 SBD source.

5) The AUD had some tuning and stage banter between songs, which were not present on the SBD.

many grateful thanks to all involved.
Reviewer: wharfrat67 - favoritefavoritefavoritefavoritefavorite - January 9, 2016
Subject: Love the Jam
Like many, my favorite part of this "performance" is the Jam before Wharf Rat. It is, to me, the essence of the Dead. It is spontaneous improve jamming where the music plays the band. What the members have said about jams like this is that they are composition in real time. You really see that here as FOTM starts to take shape, years before it ever became a "song." What I did not realize until listening to this today is that Keith sits out the first 10 minutes of this jam and then comes in with a fury on his electric piano, which he did not play nearly enough for my liking during his tenure. Great stuff.
Reviewer: c-freedom - favoritefavoritefavoritefavoritefavorite - November 22, 2014
Subject: Best sound for the jam
Sweet!
Reviewer: musicinmarin - favoritefavoritefavoritefavorite - August 27, 2013
Subject: It was a very fine time indeed.
One of my all time favorite Bird Songs. People often wax poetic about Jerry, but this is a shining example of superb ENSEMBLE playing. Listen to what Billy is doing on cymbals, Bob's counterpoint, Phil's lower register exploration, and Jerry's use of the pick and his fingers - rather than all the effects that came later on.

That said, there is some *seriously* heady music here - Bird Song glides along as easy as you please for damn near 15-20 minutes, and the big, famed jam that leads into Wharf Rat is, I think, the first time the band played around with Mickey's Happiness Is Drumming (aka Fire). Ironic that Mickey wouldn't be there for the "debut", as it were, of this oh-so-familiar chord pattern, but I think it does show just how connected he still was to the band.

So, yeah, great stuff abound here, an easy five stars for the audacious ballsiness of the band's intuition to turn a soundcheck into a full-blown afternoon of music, the tunes themselves, and this beautiful matrix - I think is my favorite way to listen to this most famous of warm-ups. And, no, I do NOT think this is better than the actual show - the actual Watkins-Glen show is something to behold.
Reviewer: limeydeadhead - favoritefavoritefavoritefavoritefavorite - January 24, 2012
Subject: Bang on
Last few years have sucked me back into 1970's grateful dead. They were up to some serious shit back then and must have blown a good few minds.
Jam in set 2 is phenomenal.

Uploaded by Matthew Vernon on August 4, 2009